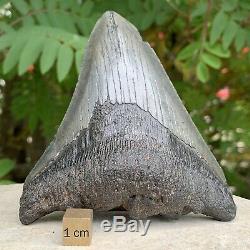 All of our Fossils are 100% Genuine Specimens & come with a Certificate of Authenticity! Please note: Some fossils maybe propped up for photo purposes.

Is an extinct species of shark that is regarded as one of the largest and most powerful predators in vertebrate history, who lived approximately 23 to 2.6 million years ago , during the Cenozoic Era. Fossil remains suggest that this giant shark reached a length of 18 metres (59 ft), this make the Megalodon nearly 3 times as long, and 20 times and heavy as the modern day Great White Shark!! When a sharks teeth become worn the predator will shed these teeth, and these will be replaced with new sharper, stronger teeth.

However, unlike humans, Sharks are known for shedding hundreds of teeth on a regular basis, which makes them a fruitful find with fossil hunters. Fossilised shark teeth come in all shapes and sizes, ranging from only a few millimetres to some Megalodon teeth measuring well over 7 inches! The items image shows the ACTUAL specimen you will receive. We also keep a record of every image we upload.

The word Fossil used to be defined as something dug up. Now-a-days it generally means The remains or trace evidence of prehistoric life.

The study of fossils is called palaeontology; someone who collects and studies them is called a palaeontologists. Fossils can be as tiny as a grain of pollen or a seed for e. Or as huge as a limb bone from a giant dinosaur. For animal or plant remains to have become fossilised , they must go through a certain process that preserves them for up to millions of years after they have died.

Usually it is only the hard parts of plants and animals that survive this long process. The most common method of how fossils formed is once an animal or plant dies it falls to the ground, then is covered by sediment. This is often sediments brought from water.

Most fossils are found in sedimentary rocks which were formed from the sediments of rivers, lakes and seas. The majority of the animal and plant fossils we find today had originally died near these areas, got broken up and deposited on the beds of the rivers, lakes and seas. The sediments covered them and over time some of the layers grew so thick that many of them got crushed. The sediments compacted and over time and turned to rock. The rocks shifted, moved and became exposed to the elements.

This process can take up to several hundred million years. Now as the rocks erode or are quarried for example, the fossils become exposed and can be collected. The Best conditions for Fossilisation.

The quick burial of animal remains in moist sediments. This prevents scavengers from eating and bacteria from decaying them.

The quick burial in volcanic ash. Many dinosaur bones in the American west have been found buried in volcanic ash. The presence of hard body or plant parts, teeth, bones, shell and wood for example. Ground water that is heavily mineralised. Sediments that are very fine make a better burial than coarser gravels. Calm conditions, so that remains are not broken up (by wave or currant action for example). The item "Carcharodon Megalodon Shark Tooth Fossil (USA Eocene) FSR062 100% Genuine" is in sale since Tuesday, April 25, 2017.

This item is in the category "Collectables\Rocks, Fossils & Minerals\Fossils\Shark Teeth". The seller is "ukge-silvergeo" and is located in Southwold. This item can be shipped worldwide.